This learning tool is relevant for pupils aged 10-11 (5th grade of primary school in Cyprus) and it is based on the Cypriot primary school Curriculum’s thematic unit 3 DEVELOPMENT AND IMPROVEMENT OF OUR SOCIAL SELF, and particularly the subunit 3.3 INTERCULTURALITY, ACCEPTANCE AND MANAGEMENT OF DIVERSITY. It is taught in the context of “Health Education” subject.

The tool was developed and structured using Drama in Education as a teaching and learning methodology. It is consisted of two 80-minute drama workshops.

With this tool, students are expected to:

- Cultivate a culture of empathy and acceptance of the different

Ask them when it was easier for them to move. They are expected to acknowledge that they moved much more easily without a "blind eye" and a "lame leg".

Split the group into pairs. Randomly distribute color papers to the students and pair them according to the color of the paper they picked.

Role on the wall: The students with their teacher’s help use two empty figures (appendix 3) to create and develop the profile of the characters they saw in the video.

Conscience alley: The teacher divides the students into 2 groups, and asks them to form two lines facing each other. The teacher invites one of the students who acted the role of the child who mocks to slowly pass through the alley created. The rest of the children become the voice of his/her consciousness, and they yell out loud the thoughts that she/he had in his head after the scene. The aim is to reflect on the behavior her/his role had towards the child on crutches.

The activity ends with discussion and reflection on the possible completion of the story. Follow-up questions might include the following:

If you came across a similar scene in your school yard, what would you do?

1. Show the UNICEF video “Every child has the right to a life free from discrimination”. Discuss students’ opinions and feelings after watching the video. Questions to be asked:

2.  Hot seating: Initially, the teacher (and then a student) takes on the role of the teacher in the video and sits on a chair in the center of a circle. The other students, assuming the role of an "interrogator", ask questions to the teacher, seeking answers about her/his behavior towards the child and the reasons why she/he reacted like this.

3. The teacher raises some questions:

4. The teacher splits the group into 4 teams. He/she randomly distributes color papers to the students and divides them according to the color of the paper they picked. Ask them to develop a two-minute scene using mime during which they will direct and change in any way they want the story in the video, giving a new title. Students are encouraged to use colorful fabrics and clothes and other objects they can find in the classroom (e.g. whiteboard, desks, chairs, books etc.) for their scene.

5. Each team will present and discuss in plenary their scene.

Tips for the teacher

For the line debate activity:

Since the “decoding” and interpretation of each statement is expected to differ somehow between the participants, the selection and the wording of the statements needs to be thought out and planned very carefully to avoid misinterpretations.

Students write on post-it notes words or phrases they learned from this lesson and then they put them on the board. They recommend a title that would suit the lesson.

(The UN Refugee Agency-UNHCR, 2014) [Coexistence: Action Plan to promote tolerance and prevent racism at school]  (From this book I took Activity 1, Lesson 1)

I like to have kids from different countries in my class.

I would rather hang out with kids who do well in sports.

I do not complain when my teacher asks me to sit next to a student who doesn’t speak Greek well.

In a classroom, all students have the right to express their opinion.

I am making fun of kids who give wrong answers.

I choose my friends based on their character.

Children who don’t play football well shouldn’t be involved in the game at all.

I respect children who have different abilities than me.

Both girls and boys can become class presidents.

For our class to do well, all students should cooperate with each other.

UNICEF: Every child has the right to a life free from discrimination:

Role on the wall (figure) 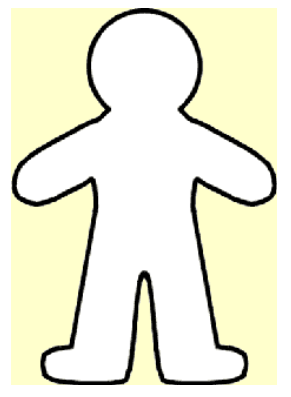 Your score:
You got out of correct.